Since the days of getting home from school and habitually watching our favourite cartoons, we’ve been avid fans of The Transformers, and even bigger grown-up fans of the movie franchise. So far, there’s been four big blockbuster movies released since 2007, with the fifth one arriving in cinemas very soon.

This isn’t to say that you have to be a diehard Transformers fan to appreciate the movies. In fact, audiences of all ages, genders, and interests from all over the world go wild whenever a new movie is released, putting The Transformers into the top 10 highest grossing movie franchises of all time.

So far, the films have earned a whopping £2,980,698,637 at box offices worldwide, with the fifth one promising to be the most explosive and gripping one yet! But just how action-packed are its predecessors? And who is the toughest Transformer of them all? We, at iCarhireinsurance.com, decided to watch all 601 minutes to find out.

The total cost of damages from all four movies amounts to an astonishing £7,291,087,669. That’s enough money to send a team of NASA astronauts to the moon and back a total of four times. Amongst the thousands of destroyed buildings and car wrecks lie more valuable items, such as an aircraft carrier worth an estimated £3,474,366,930 (making up nearly half of the overall damage cost). As expected, it was the cunning Decepticons that caused the costliest destruction. 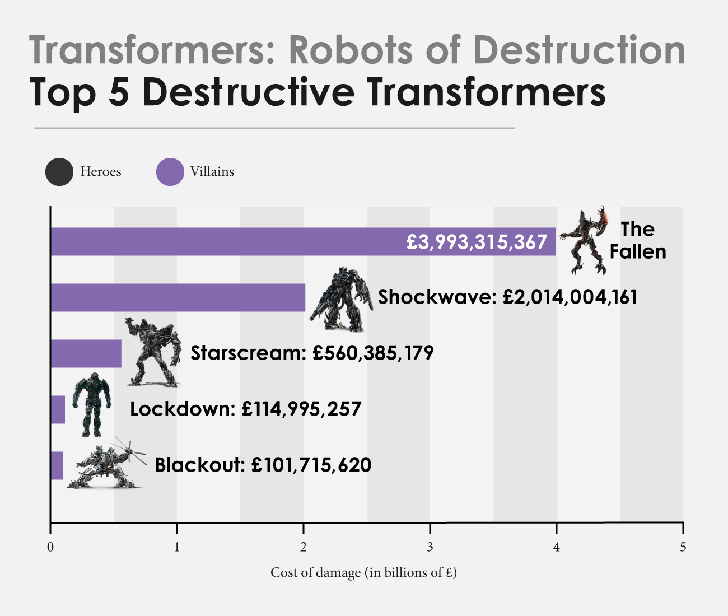 The characters that caused the most damage throughout all four movies were (you guessed it) the Decepticons, with The Fallen causing £3,993,315,367 worth of destruction, followed by Shockwave, Starscream, Lockdown, and Blackout. Surprisingly, the main villain, Megatron, didn’t even make the top five. 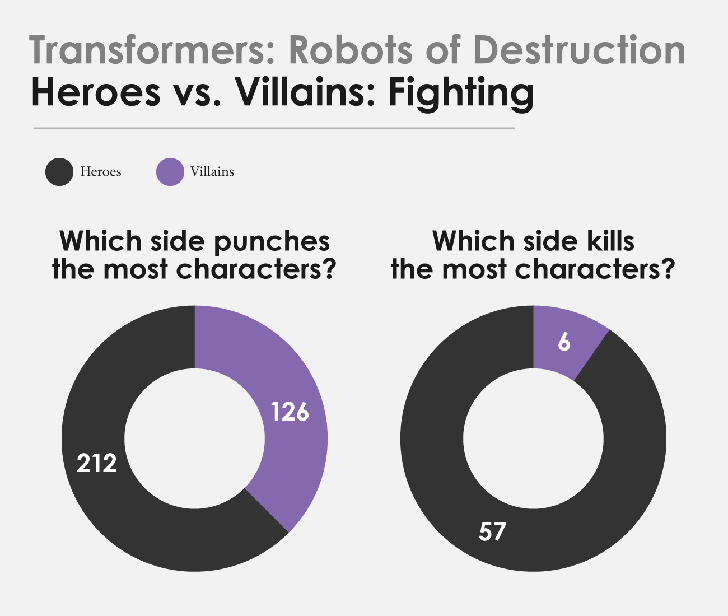 Although the villains cause the most damage, it’s the heroes of the movie who turn out to be the toughest. The Autobots (with the help of the Dinobots in the fourth movie) kick some serious butt throughout the four movies, killing nearly 10 times the amount of characters as the Decepticons. 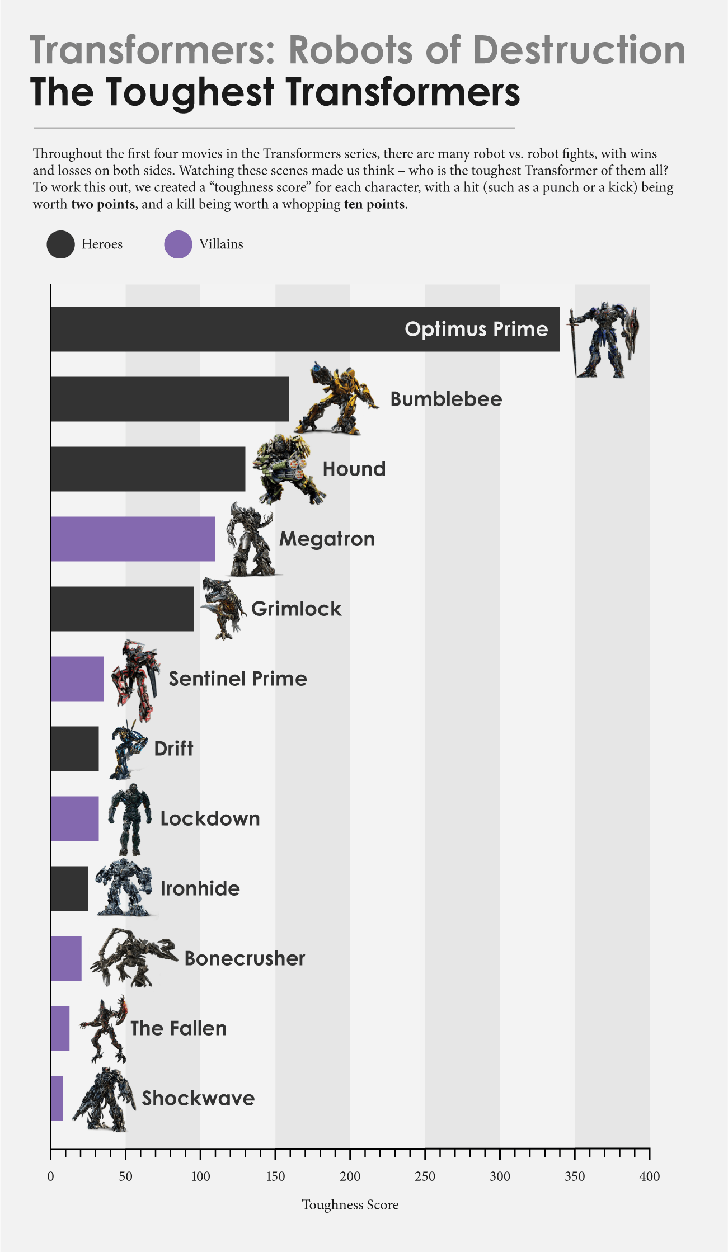 So, who do you think takes the trophy for the most resilient and badass character of them all? None other than the hero of the whole franchise, Optimus Prime. He scores more hits and kills than any other character – totalling more than the Decepticons combined. Interestingly, Hound, who only featured in the fourth movie, makes a surprising entry into the top four toughest characters, with Megatron following in fourth place. 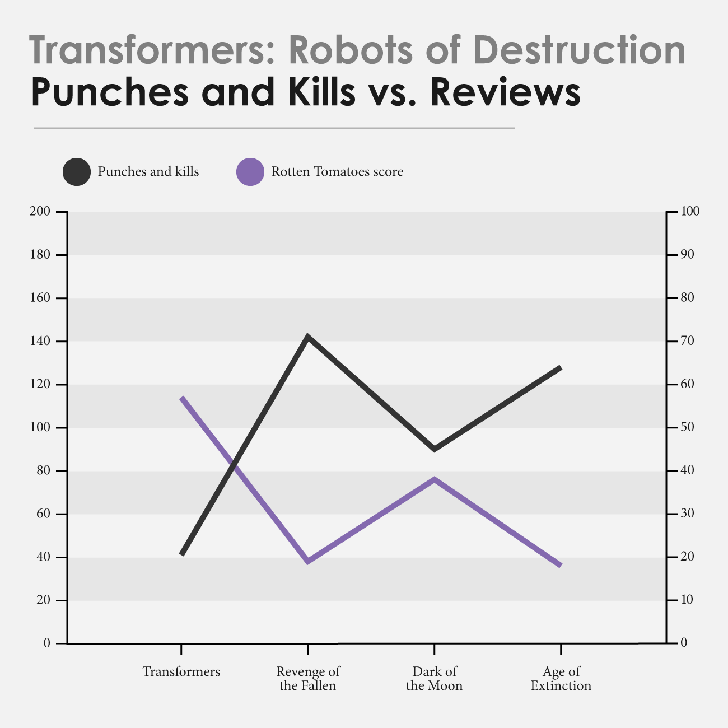 Here’s where it gets REALLY interesting: as the violence between Transformers goes up, the reviews from critics actually goes down. Ratings taken from Rotten Tomatoes gave a significantly lower rating to Revenge of the Fallen, which has the most violence between characters, than the other movies. On the other hand, the highest film reviews are given to Transformers, the movie with the least violence. 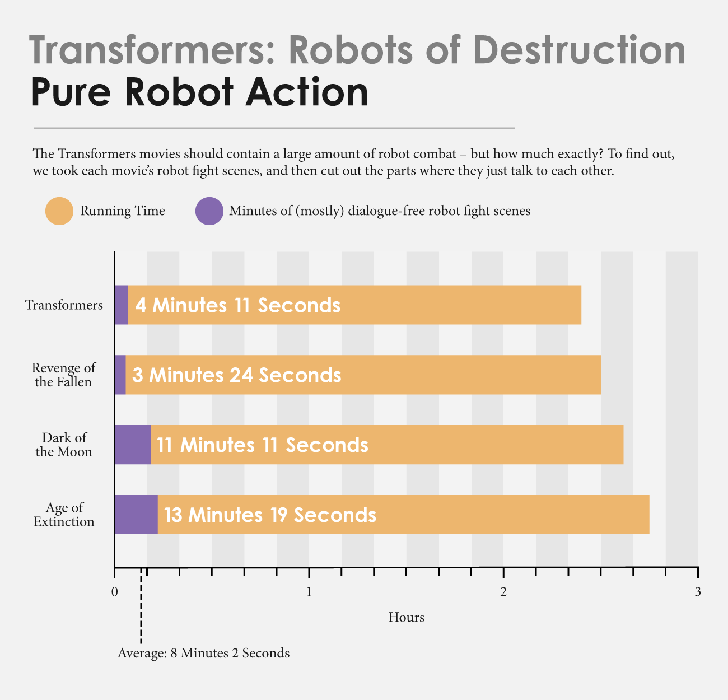 As you might expect from a Michael Bay masterpiece, all four Transformers movies are filled with excessive explosions, fiery action, and chaotic destruction, all in the name of saving the human race. However, if you look at how much robot combat occurs in each movie, it’s a lot less than you might expect. The amount of robotic combat increases as the franchise progresses, with the fourth instalment totalling 13 minutes and 19 seconds of non-dialogue fight scenes between the Transformers alone. Nevertheless, there’s just over 32 minutes of robots actually fighting throughout all four movies – that’s only 5% screen time of actual robot combat.

Finally, to work out the total damage, hits, and kills carried out by each Transformer, we broke it down into cars totalled, buildings destroyed, buildings damaged, and specialist items that were destroyed, such as rocket launchers, ships, aircraft carriers, trains, helicopters – you get the idea.

Re-watching the franchise has got us extremely excited for the newest instalment, with Sir Anthony Hopkins joining the already star-studded cast. And, if the trailer is anything to go by, this promises to be the most explosive and gripping Transformers movie yet!