The iCar family go on an unfortunately expensive holiday.

Travelling on the continent can be confusing enough as it is. Driving on the ‘wrong’ side of the road, trying your hand at the local language (before they realise you are British) and simply navigating in an unfamiliar place are all part of the fun. What isn’t fun, however, is discovering a serious money drain that you hadn’t accounted for, either during or after your holiday.

As much as you plan and plan again, sometimes it is easy to overlook some of the details when preparing to go on holiday. Finance is an area that normally dominates a family’s thoughts before a holiday, and usually all efforts are made to ensure that they have enough money whilst on holiday. Sometimes, however, small charges that seemed relatively inconsequential or were unknown can add up, and have the potential to mar what should be the experience of a lifetime. It isn’t uncommon for a family to assume that accessing money is exactly the same abroad as it is at home. Unfortunately, this isn’t the case as the iCar family found out:

The iCar family are heading to France for their summer holidays. The ferry is booked, the route planned and the children are excited. Mum and Dad, however, have the usual pre-intercontinental travel nerves. Dad got his Euros exchanged the day before they left – much to Mum’s annoyance – and feels like he probably could have got a better exchange rate if he’d shopped around and bought them earlier. He ended up getting just €572.20 for £500 when he could have exchanged his £500 for €585.95 if he had pre-planned and bought the euros a month earlier. They did, however, get a great deal on their prepaid travel card as they booked it well in advance on a day with a very good exchange rate. This move’s luck lasted throughout the holiday, as the card’s exchange rate is frozen to the day of purchase, so the family can enjoy 2% more money throughout their holiday than if they had bought the card at the same time as their cash.

The journey goes without too much of a hitch except for a few tense moments on the French slip roads – the joys of driving a right-hand drive car abroad. The relatively smooth trip is shattered upon arrival at their hotel. The hotel they have ‘bookings’ for has actually fallen into administration in the weeks after booking their accommodation. Unfortunately the iCar’s desire to save money has actually resulted in costing them a lot more money on this occasion. They were hoping to avoid the 4% credit card processing fee that using their credit card to book the hotel would have levied but, in doing so, waived their Section 75 of the Consumer Credit Act protection. They also waived the potential protection of the ABTA by booking directly with the hotel instead of through a travel agency. So this regrettably means that the €1170 they spent on the 13 day duration for a family room now accounts for nothing, and is entirely unrecoverable. It dawns on the family that they either shell out for another reservation or face an exciting two week holiday from the back of a sedan.

After a brief stint in an internet café frantically searching for a nice and relatively cheap hotel, the family make their way to their new home for the next two weeks. The hotelier makes the arrangement and then asks how they’d like to pay the €975, to which Dad responds that he’ll be using his credit card. “Local or Sterling?” asks the hotelier, and Dad responds rather unsurely: “Sterling, please”. This is another avoidable mistake, but Dad can be forgiven for assuming that he’d like his Sterling card to be charged in his country’s currency. The trouble is that (obviously) he isn’t in the UK anymore, and that he’ll be subject to some pretty unreasonable exchange rates when they convert the hotel’s cost from Euros into Pounds. Instead of being charged the day’s rate of 0.8736 Euros to the pound (which was already higher than expected) they were charged at 0.9 Euros to the pound. So, what could have cost them just £850 ended up costing them £875.42 – just for the ‘pleasure’ of seeing the price in pounds! The only silver lining in this case is that the family probably won’t be aware of how much extra they paid until they eventually return home…

With the unpleasant setbacks behind them, the family set about trying to enjoy their holiday by seeing the sights and looking for fun things to do. They eventually decide to take a look at the local market but after a while, Dad gets a bit bored and tells them he is going to look for a newspaper. After a little while, the children begin to get a bit thirsty and could do with a snack, so Mum takes them to a Super Marché to get some provisions, as well as the usual forgotten items: sun cream, mosquito repellent and a pair of ‘continental’ swimming trunks for Dad. When they reach the till Mum realises that Dad has all of the money – except from her debit card. Whilst this isn’t a huge problem, paying with her debit card will see it being charged a significant percentage on top of the goods’ price. What should have been just €50 ended up being €53.49 after the conversion fee of 2.99% and the transaction fee of 2% (which had a minimum of £2). On top of this, and unbeknownst to Mrs iCar, is that the bank has now put a block on her debit card after that transaction because it has interpreted it as potentially fraudulent because she forgot to inform the bank of their holiday. This isn’t the end of the world and is fairly easily remedied, but usually it takes someone being rejected at a checkout for them to realise.

Dad eventually turns up, rather dismayed. At some point a group of people bumped into him, which he didn’t think much of at the time. Upon reaching the newsagents, however, he realised that his travel wallet must have been lifted from his pocket during the bump. “Most of the cash was in my jacket pocket, but all of our traveller’s cheques were in the wallet!” Dad grumbles. “Not to worry, we kept the codes and I even photocopied them. We just need to go back to the internet café and get in touch with American Express,” replies Mum.

These hindrances have cost the family more than just some irritating moments – all in all they could have saved £39.99, which is coinsidently the price of an iCarhireinsurance annual policy! This means that poor Grandma iCar won’t get the Calvados she asked for and Uncle iCar won’t be enjoying his usual holiday gift of Brie.

If you’d like to avoid having a holiday like the iCar family’s, check out the table below that breaks down some of the most common payment methods and their corresponding charges and benefits. 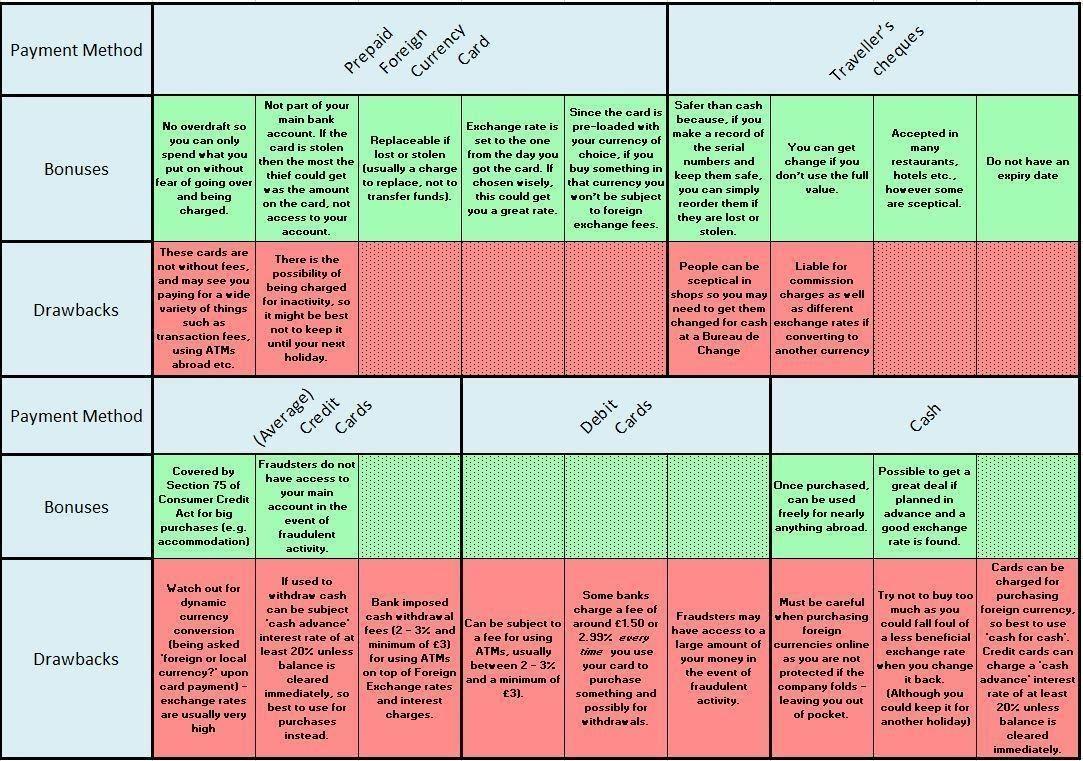