It’s that time again. That most glorious of times. As the Premier League ends, this year the World Cup begins – meaning the football season just got a whole lot better.

We love football here at iCarhireinsurance, and, as car hire insurance experts, naturally we also love cars. With the biggest football tournament in the world just around the corner, we’re really starting to get excited.

In a way, footballers are a lot like performance cars. Where cars are built to a purpose, with individual strengths shining through and helping them perform well in certain situations, footballers, too, are trained with intent. Some are stronger sprinters, honed for frequent bursts of speed. Others are more defensive players, able to stop and turn on the spot and gain an advantage on their rivals.

With this in mind, we set out to calculate what the best match between supercars and football superstars would be for the England, Germany and World XI teams. We then decided to go one step further than that and draw up team sheets and football stickers because, if a thing’s worth doing, it’s surely worth doing properly.

Everyone has their own idea about how good a certain footballer is, and it’s pretty similar when motorheads get going about their favourite cars. This meant we needed an objective rating system to help us land our pairing within some form of framework. So, where did we turn? Video games, of course. We specifically turned to FIFA 2018 and Forza Horizons 3, as they’re up-to-date and offer quite granular breakdowns of car and footballer stats that are constantly being updated.

We started by plotting the various ratings and stats (such as sprinting and ball control for FIFA, and acceleration and braking for Forza) relating to each footballer in the supposed line-ups for the England, Germany and World XI World Cup teams. We then chose to highlight their various strengths to find their overall strong point. Once we’d identified this, we could transfer this benchmark to the cars in Forza, whose various stats were also ranked numerically.

So, here’s our England car line-up. As with the players themselves, there’s a lot of money on the pitch – but the cars do not cost nearly as much as the actual team. In fact, if you were to try and buy one of each car in the line-up, it would set you back a cool £4,467,780. However, if you were flush enough to try and buy each footballer, you’d have to cough up something in the region of £648,000,000*. Suddenly eleven supercars look quite cheap! 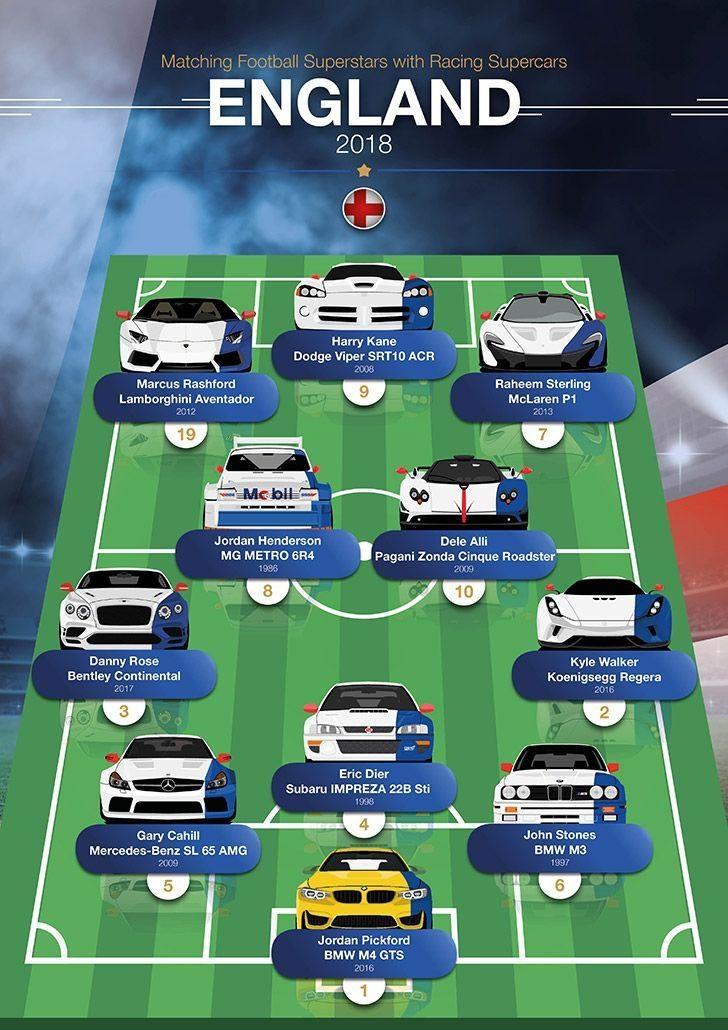 You’ll notice that we’ve got quite a lot of frankly ridiculously powerful saloons and coupes in front of our goal, with Jordan Pickford represented by every middle manager’s dream car: the BMW M4 GTS. The goal is then defended by some insanely nippy little numbers: the Merc SL 65 AMG, the BMW M3, and the Subaru Impreza STI – they’re all known for their great handling and braking qualities, not to mention their speed. 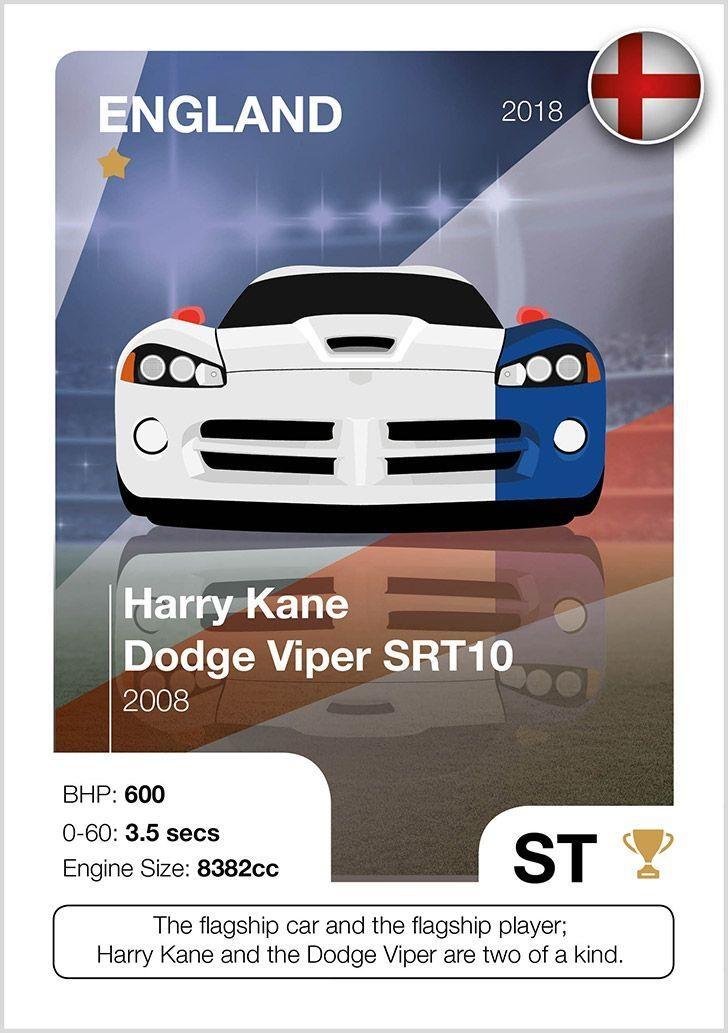 There’s a little more diversity in the four midfielders, with Jordan Henderson finding his motoring match in a classic rally car, the mighty MG Metro 6R4. This car was chosen based on its incredible handling skills (and not its age!), which we correlated with the top ball control that helped earn Henderson his Liverpool captaincy and place in the England team – even if it didn’t secure him the England armband. 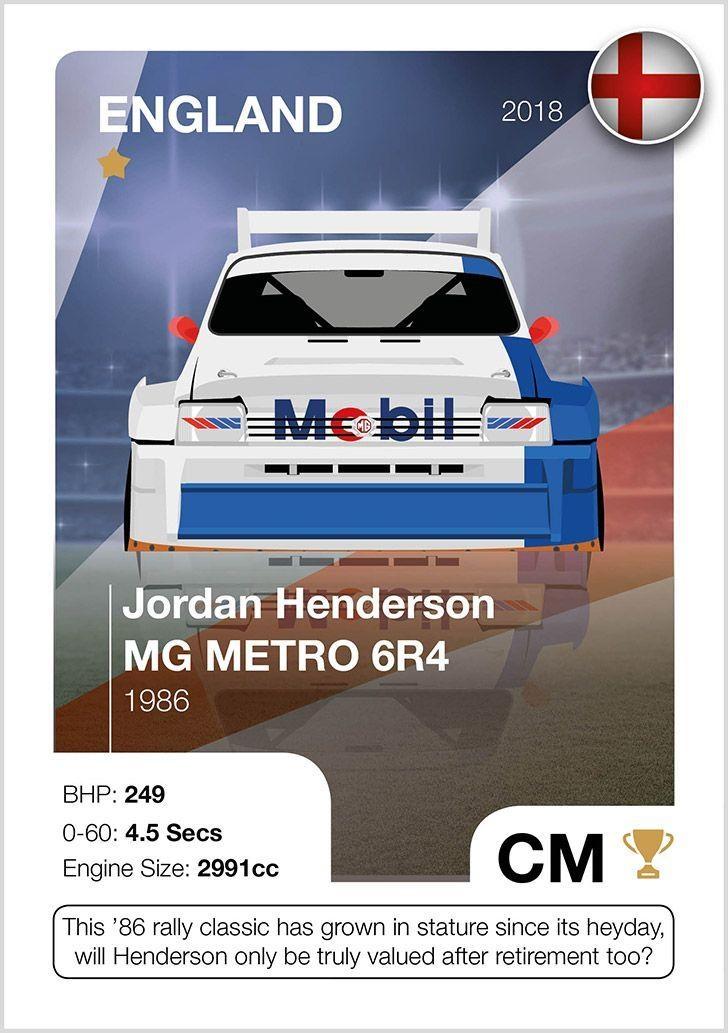 Finally, we have three stupendous supercars up front, each correlated with the three top strikers England has offered up. Raheem Sterling is represented by a 2013 McLaren P1 – a car synonymous will intense bursts of speed, boasting a 0-60mph of just 2.9 seconds. 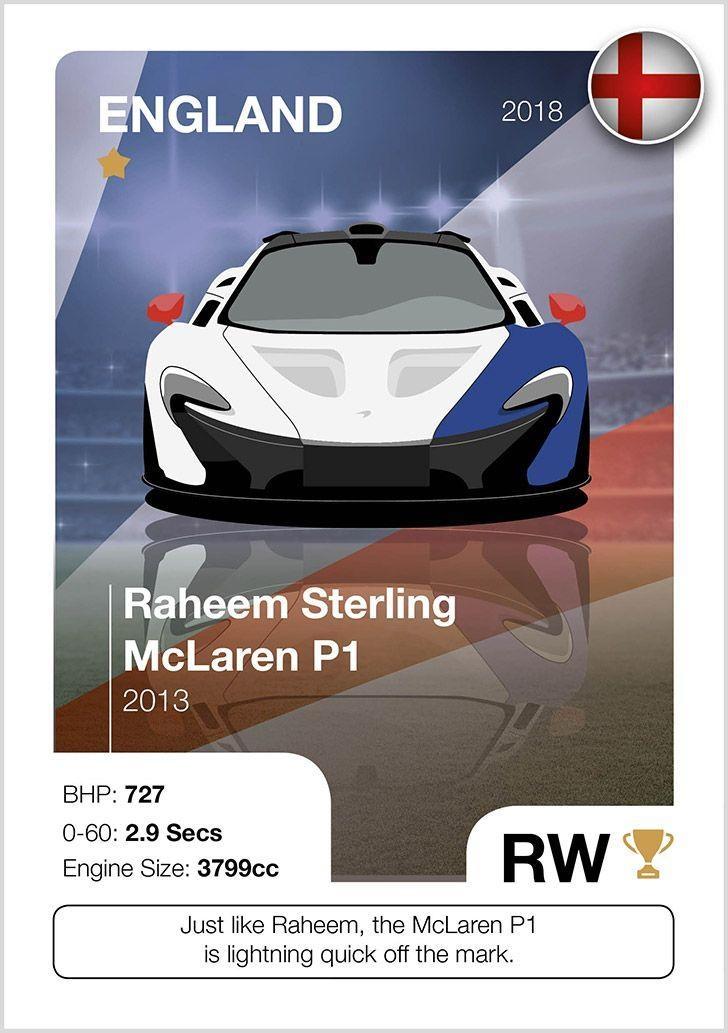 Germany may usually get one over on England when the two teams meet on the pitch, but in this instance their line-up isn’t quite as strong - and is less than half the price of England´s. Check out their team sheet below: 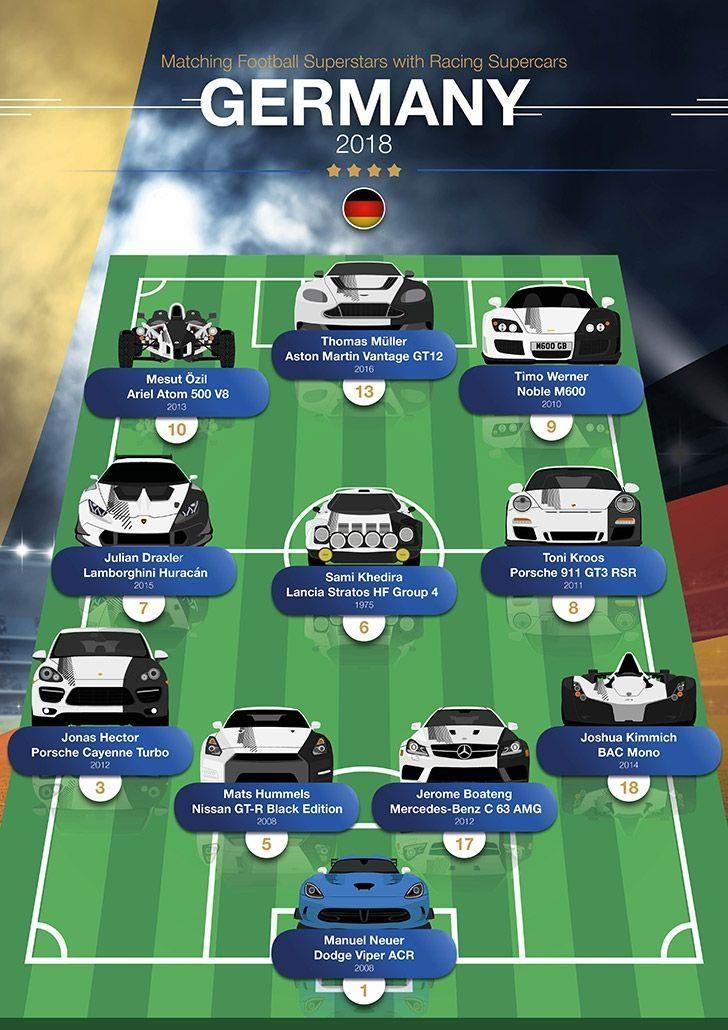 We’ve put the cars in the formation that German manager, Joachim Löw, is likely to play this summer – a classic 4-3-3 approach which, as current world champions, has served them well in the past.

Why stop at just the England and Germany elevens? Not content with plotting just these two teams, we thought we’d tackle the mythical heavyweight team, the World XI. For this, we selected who we thought the ultimate team of the tournament might be made up of and calculated what supercars would represent them. Would you make any changes to our selection? 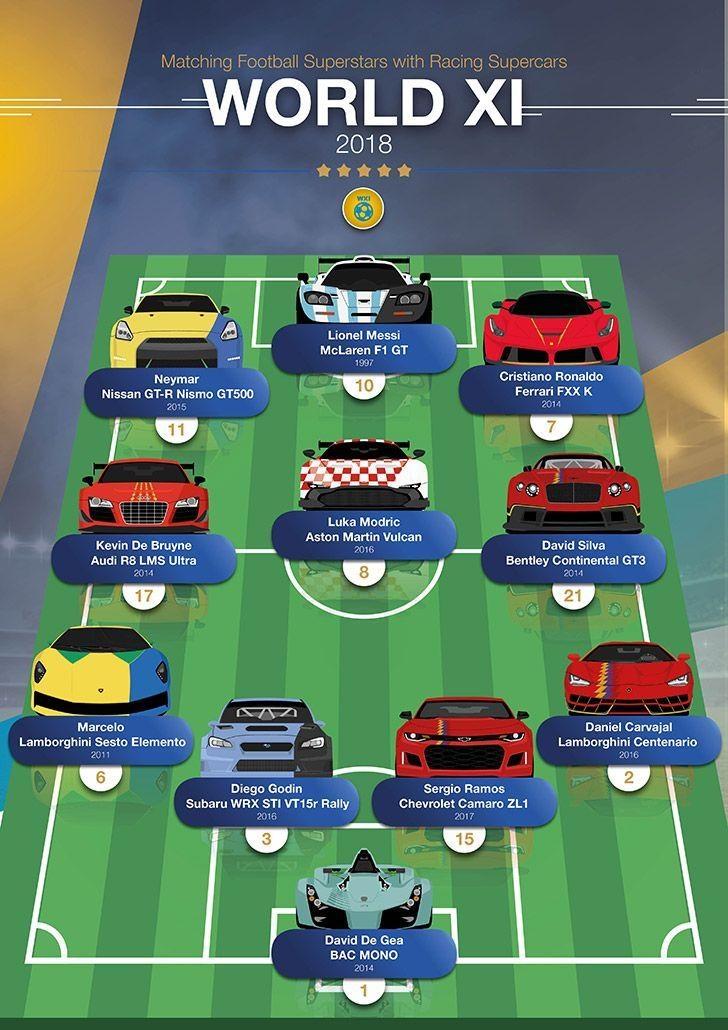 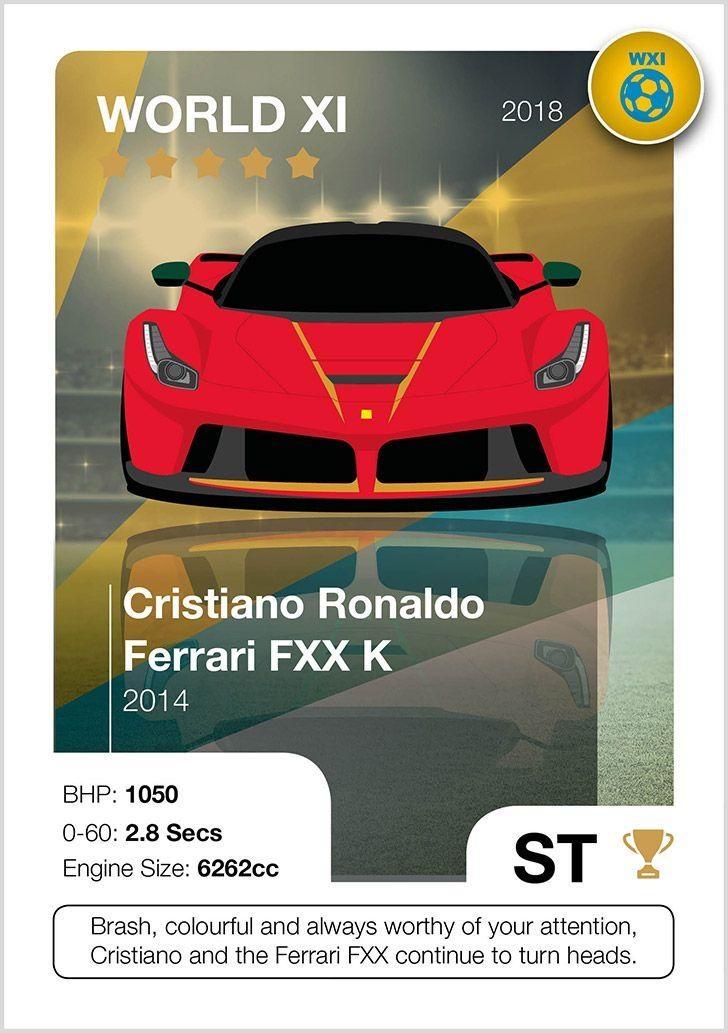 Cristiano Ronaldo is pretty much universally regarded as a master of ball control which, in turn, makes it easy to liken his control and agility to that of a car’s handling. As a result, he sees himself in a car probably not too far out of his price range (he bought an F12 in 2017): the £2,000,430 Ferrari FXX K. Packed with a whole slew of design features that make this extremely limited production car a monster on the track under a variety of conditions, we thought it was a perfect match for El Comandante. 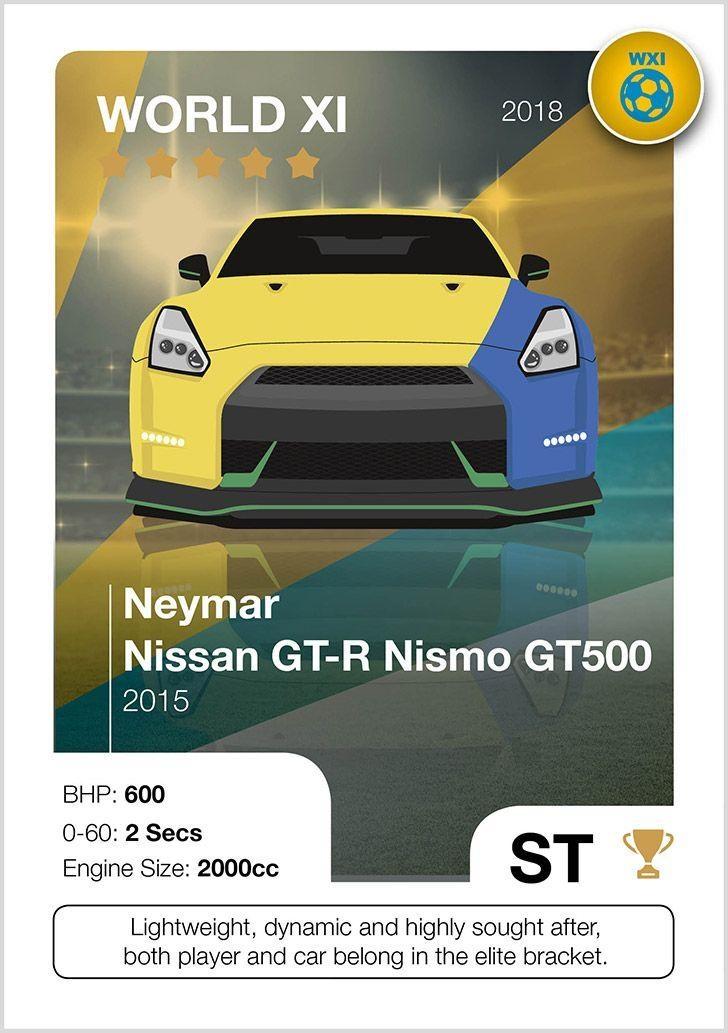 The current most expensive player in the world is surprisingly represented by the not-so-ridiculously-priced Nissan GT–R Nismo GT500. At £111,068, the Nissan is quite a bargain compared to his striking partners, but don’t be fooled by the comparatively low price – this car is also very rare. Lightweight and very fast, this is the perfect car for Neymar. You certainly get a bit more bang for your buck in the car world! 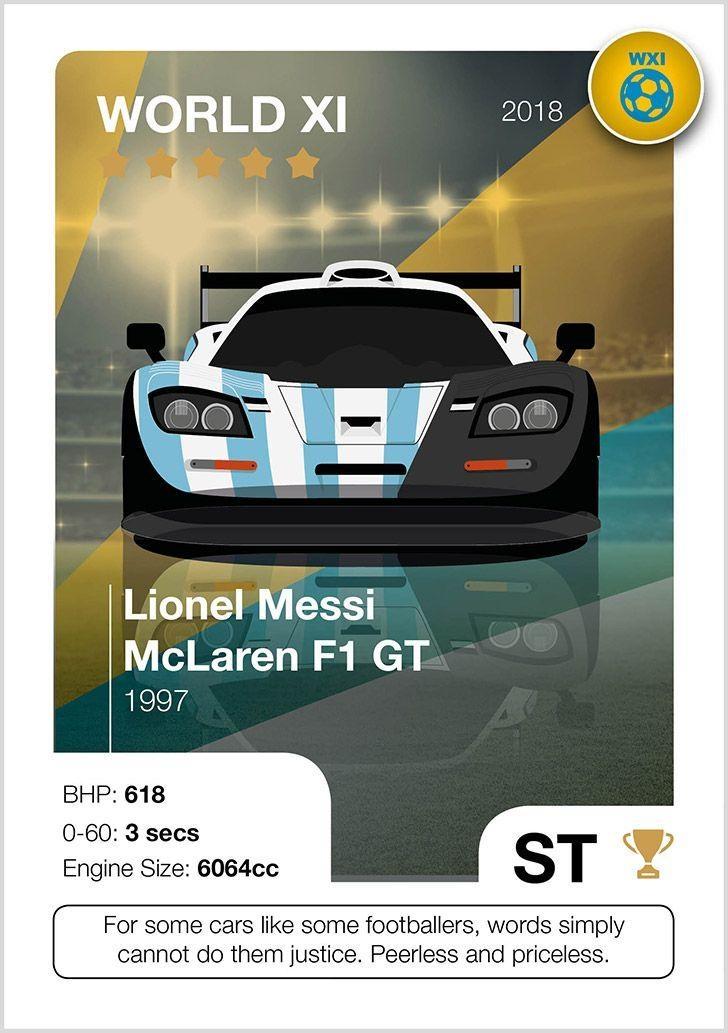 Representing arguably the best player of all time, Lionel Messi, we have the McLaren F1 GT. We certainly struggled to find a car from Forza Horizon 3 that handles as well as Leo´s ball control on FIFA 18. Just like Messi, the £11,000,000 McLaren F1 GT is very rare and highly revered – a perfect match.

What do you think of our selections? It’d be interesting to see how both squads would compete on the track but, since that will be difficult to arrange, we will just have to settle for watching the real players battle it out this summer.

What car would you have picked for each player? Let us know over on Twitter @iCarhire.