Driving in Europe - Know The Rules! 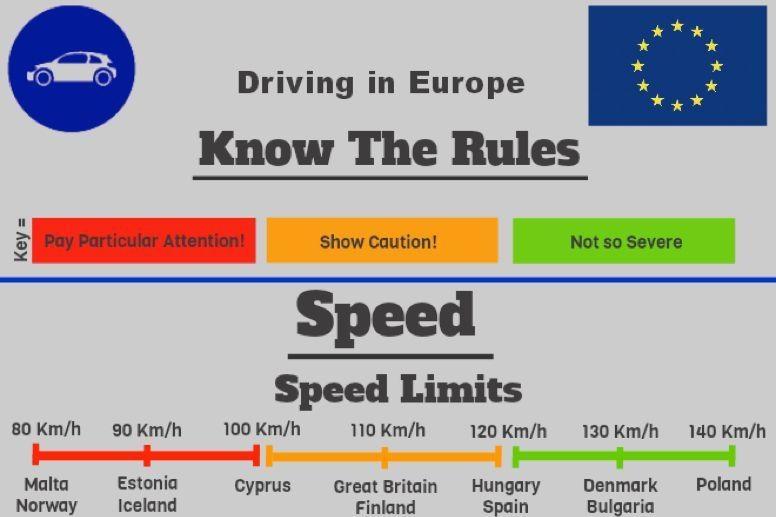 Before going on your European travel this Summer, be sure you know the laws of the land before hitting the road!

It seems as though the UK is finally beginning to see some sun with strength – but perhaps it is a little too soon to proclaim that ‘summer is here’. With not long to go before the summer holiday season a sense of sunny anticipation is descending upon the nation as we begin to get itchy feet and look forward to the excursions either hastily or methodically planned. Many holidaymakers will choose to drive abroad to their destination this year in favour of plane and train travel, particularly to Europe, but are you completely clued up on the rules and regulations that European countries uphold on their roads? Have a browse at the information below and familiarise yourself with the differing laws present in our continental cousin’s countries.

Webmasters:If you wish to use this image please embed the following:

It could be said that many drivers in Britain have a ‘plus ten’ attitude towards speed – that is, the speed limit ‘plus ten’. Whilst the speed limit is currently set at 70mph (and with no concrete plans to increase it to 80mph) it seems as though a large portion of that nation have taken it upon themselves to personally increase the speed they travel on motorways to a heartier (but potentially more dangerous) 80mph. This is probably due to Britain’s speeding laws allowing a 10% margin for equipment error, which would make the true but nevertheless unofficial speed limit at 77mph. Touch 79mph though and you run the risk of being slapped with a speed awareness course or a fixed penalty fine of £60.

Elsewhere in Europe we find a great range of differing policies on speeding and the punishments that motorists may face if caught breaking those policies. Some countries appear to have a relatively lax approach to speed whereas others have adopted more of an iron fisted approach. Poland has Europe’s highest speed limit (outside of Germany’s ‘recommended’ Autobahn limit) of 140kph (87mph) and they also enjoy some of the lowest penalty fines. Conversely, Norway exhibits some of the most modest speed limits not just in Europe but also the world, with a dictated standard limit of 80kph (50mph). Norway also leads the way in terms of strict enforcement with a fine that could potentially exceed €465 (£393) – certainly enough to put a downer on your travels.

Many EU countries have agreements with one another about following up fines that are not treated as ‘on the spot’, and so leaving a country having been caught speeding there should never be considered as the end of the matter and you may be pursued by your country’s authorities. However, the EU-wide collaboration only extends as far as fining the accused, and you won’t lose your license for something you did in another country.

In the UK, alcohol related accidents and fatalities are much less common than they were in 1979 when records began, and this is due to more efficient and diligent policing as well as a more significant deterrent system. There is also a much larger social stigma attached to drink-driving as we move away from a culture that accepted having ‘one for the road’ as just a little over indulgent and instead as a potentially life changing decision.

Whilst it is never advisable to drink and drive, it makes sense to know whether obliging your host to that small glass of local wine would cost you a fine or, in the case of The Czech Republic, 18 days in prison. The Czech Republic is also interesting because, aside from Slovakia, it is the only country in Europe that demands zero alcohol in the blood stream in order to pass a drink-drive test.

In order to combat the mentality that some people adopt, such as ‘I’ve had a large meal’ or ‘I have a fast metabolism – I’ll be fine’, countries such as France have taken to requiring a breathalyser test in the car by law, encouraging citizens to test themselves if they are unsure. Presumably this also removes the possibility of a motorist arguing that they had no idea they were over the limit because, in theory, if they had a drink then they should have tested themselves before getting in the car.

In terms of charges for using motorways, bridges and tunnels, some countries have it better than others. Germany, for example, has no toll charges at all whereas Austria requires that a Motorway Vignette be purchased. A Motorway Vignette is a form of road taxation that requires motorists to purchase a sticker that is displayed in much the same way that we the UK display our Tax discs. Be warned, however, since there are significant fines for people who drive without one, and a visitors vignette could reach up to €110 for just one day on Austrian ‘A’ and ‘S’ roads. As with anything to do with motoring abroad, fore planning is essential in order to avoid hefty and unforeseen payments.

Some countries require toll payments for only a few elements of their transport infrastructure, often to support the astounding costs that such ventures as creating bridges and tunnelling under rivers can create. For example, in Denmark there are no tolls for motorways and the only charge is to use the Great Belt Fixed Link, or Storebæltsforbindelsen, a huge bridge that holds the title as the world’s third longest main-spanning bridge. Similarly, in the UK, we charge to use sections of roadway that require significantly higher costs of upkeep than the average stretch of road, such as the M6 and the Humber Bridge.

If you are intending on traveling across Europe and you fear you may come into contact with tolls, make a map and plot their positions and prices on it – that way you aren’t in for such a shock! Tolls can increase the cost of travelling by road significantly, so you should never simply see how much it costs when you get there. It would be a shame to have to come home early because you spent all your money trying to get there!

Our infographic takes some of the information above and assembles it into an easy to digest list of the possible penalties and laws that may face you when driving in Europe. The countries were organised in a similar manner to the traffic light system – with green being the most favourable and red the most severe in terms of law and penalty stringency.

All details are subject to change and cannot be guaranteed. As with all travel advice, it would be prudent to research your trip thoroughly before you go.